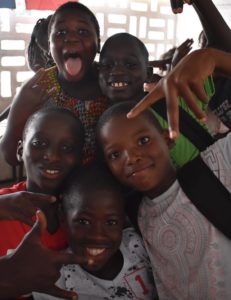 The day started properly when we got off the bus in the centre of Gunjur and made our way into the TARUD office. TARUD is the local NGO, the Trust Agency for Rural Development, set up in 1997 by the Marlborough-Gunjur link. There we listened to Baai, the Director of TARUD, give a very wise and moving talk.

Then we split off into groups to meet three important and high-status members of the community: the Imam, the Nyansimba, who is the women’s leader, and the Alikali or mayor. We met the Imam, the religious leader, like a priest, who provides advice to people on religious matters and practical things. So, he oversees all Islamic affairs, and also settles marriage and family disputes. People come from all over, from Senegal, to ask him to pray for them and to listen to his wisdom. Meeting the Iman and questioning him, you really get the sense he is genuine, down to earth, and does good things because he loves people, loves his religion and loves his role in the community.

Katy asked him for some life advice. And he said the most important thing in the world is your parents. He talked about how important it is to respect them, not because they’re older but because they’ve raised you and formed you. This year with TTV we’re thinking about identity. So, it was interesting to hear the Iman say, “You are who you are because of your parents. They lay the foundations for everything you become.”

Afterwards, I talked to my partner, Mohammed, about his parents. He told me his father had died a couple of years ago. He didn’t want to talk about it too much, but he told me he’d been a police officer. He also said his father had two names – an African name and an Islamic name. His Islamic name was Ibrahim which is the same name as Abraham. It made me think more about the role of religion in the life of the community. So, it was fitting that we also visited the Roman Catholic school today. It is much smaller than the other schools in the district, which shows how much of a minority Christianity is in The Gambia. Compared to the huge Lower Basic school, which we visited yesterday, the Catholic school is tiny.

Next to the school is a little church. It was bizarre to see a Gambian church; it felt deprived. There’s obviously less money here, so it looked scruffy. The piano didn’t work, there were no stained-glass windows like churches in the UK. But all that really mattered was they had a place to worship. It was interesting to hear that the congregations are segregated by gender here. So, the boys sit on the right and the women on the left.

When we arrived at the school all the kids were singing and dancing and obviously really happy to meet us. It was such a lovely greeting. The kids were very vocal and they had prepared lots of music to perform for us. And then we watched and heard the exchange of letters from Preshute Primary School. It’s lovely hearing what the English kids have written to their Gambian friends in Gunjur. Dr Nick Maurice puts really amusing emphasis into the letters when he reads them out.

Like the Imam said, it’s all about loving one another.